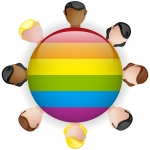 At this historic moment in time, when the Supreme Court of the United States is reviewing the constitutionality of individuals’ right to marry, regardless of partner gender, it is somewhat disheartening that a blog on the respectful inclusion of LGBT persons in research is needed, and yet, it is needed. On the federal level, LGBT health advocates have worked for years for minimal victories like including the words, “gay” or “lesbian” in federal publications about the state of American’s health (for example in Healthy People 2010). It was only after much protest by the LGBT community that the final version of this document incorporated sexual orientation in a small minority (6%) of the data templates.

These small victories at the federal level are incredibly important for the LGBT community at large. The simple act of including sexual orientation and collecting data in a federal report on health gives this embattled group of individuals the recognition of being a minority. This official act of naming a minority may seem obvious or silly, and yet, how many researchers include the following options when asking participants about their gender: male, female, transgender, or other? If you don’t collect this simple information, how can you explore potential differences or disparities about individuals, regardless of your topic of interest? Collecting information about male or female is rarely questioned and has been shown to be an important demographic characteristic to collect, since males and females generally have substantially different life experiences, societally driven expectations, and genetic and hormonal differences. It seems logical that these same differences apply to the LGBT community at large.

Imagine if the word male was not allowed to be published in a federal publication. Wouldn’t it be odd to not even collect data on males—to not understand economic, social, or health differences for males compared to all other people? When you allow individuals to be named and collect data about groups, you give them a voice. Most importantly, you provide a more rich, detailed, and real picture of our world. Ignoring the individuals who comprise the LGBT minority does not make them go away. The easy and simple fix of collecting data using more than two genders as an option, or respectfully acknowledging that sexuality may be more fluid than strictly heterosexual or strictly homosexual will go a long way to expanding our knowledge of the world in which we live.